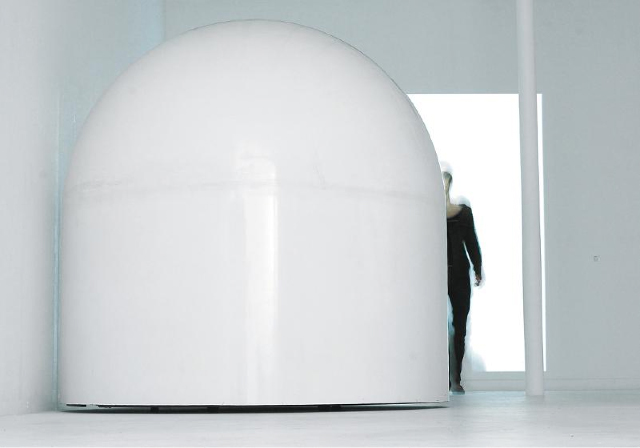 “The Behavior of Things” research project questions the notion of behavior, seen as increasingly fundamental to contemporary artistic creation. However, instead of situating behavior in the realm of the living, where it is usually found, our project undertakes to explore this dimension for works, objects, dispositifs or environments: how can we understand, theorize, experiment and conceive works that incorporate a behavioral dimension, by which we mean, having the capacity for actions and reactions (mainly ‘physical’) in relation to their environment and, more specifically, their audience?
“The Behavior of Things” project is built around a genuine multidisciplinary convergence: with the involvement of researchers from the fields of art and art sciences, design (both object and interaction), sociology, engineering sciences (robotics, mechanics and IT) and cognitive science, our research aims to generate a cross-discipline expertise on the subject that is of course theoretical but also, and importantly, is practical in that it allows to elucidate methods, protocols, writing, techniques, etc, to enable the creation of artifacts of this kind in art and design.

This research project, initiated in 2012, questions the notion of behavior and focuses on the design and creation of behavioral objects. By this term, a sort of neologism, we seek to define a category of specific objects.
We define behavioral objects as any artifact that can demonstrate spontaneous actions or reactions that are not systematically predictable during the interaction and that are not directly inferable from their physical shape. The behavior defines the actions and reactions of the object in its environment and, in return, the reactions and actions it provokes from the individuals with whom it interacts; or, in other words, the behavior it seems to show to the other (non-human and/or human) agents, and in return the behavioral reactions it provokes from its audience.
The project thus involves designing animated objects, especially through methods of programming, engineering, and robotics. However, these are not automatons, as in machines that reproduce the movements of a living being (like Vaucanson’s automata); nor are they programmed objects, as in a system that processes information (like Turing’s machine); nor are they interactive objects, which react only to disturbances in the environment. The behavioral object is more than an automaton, more than a machine, and more than an interactive object. It has a specificity: Its movements, actions, and interactions are interpreted as finalized behaviors rich in meaning in the eyes of humans, even if carried out by enigmatic objects.
The projection of intentionality is always distorted by doubt. By creating a hesitation between animate and inanimate, between organic and inorganic, between artificial and living, or between human and non-human, behavioral objects are part of both real life and fiction. They fascinate and at the same time they disturb. This dimension of psychological projection is essential when defining them.
In the field of technologies, the emergence in recent years of robotics for the general public and of increasingly pervasive computing has helped lead to an approach to interaction that is not anthropo-centered, but, rather, renews the intentional approach (governed by human intervention) of interactivity: an interactivity of the world of objects towards that of living beings. Through artistic creations as well as through emerging practices in interaction design, a “critical” trend is increasingly infiltrating these fields. It is overturning the perspective between humans and their artifacts, and putting the notion of behavior (autonomous, automatic, generative) at the heart of the debate about contemporary creation.
How do objects and the environment perceive us? If esthetics is undoubtedly the prerogative of the human world, which can thereby construct its feeling of beauty based on its senses and sensibility, how can we imagine that the world of objects can also incorporate a similar capacity? How can a chair perceive us and take action as a result?
While the question may seem incongruous, it nevertheless seems more and more topical, because the technological language and the concerns it introduces are already topical: Do we not already speak of “sensors” to define those input interfaces in every type of interactive system? And if consequently we were to put forward the hypothesis that “esthetic perception” could also belong to the realm of objects, then the latter must also be capable of action in return, or simply of activity. How can we consider this? Script it? Condition it?
Robotics is, of course, a field that has been concerned with these questions for a long time. Though people are beginning to wonder, in the field of human-robot interaction, about the quality of movement, about the social acceptability of these behavioral artifacts, these questions are rarely approached from the perspective of artistic and esthetic concerns, which are not vectorized by a functional and utilitarian necessity. How can we project ourselves into the eyes of this world of objects that surrounds us so as to invent new forms of relationships to us, the humans? And further, how can we design, experiment, and produce works that incorporate a behavioral dimension? And why?
While much research on this problem exists in the field of engineering sciences, especially in the areas of robotics and artificial intelligence, it seems there has been little research in the field of contemporary creation, in art and design, and in behavioral robotics.
To understand the importance of this transformation, research must not limit itself to observation of contemporary artistic practices or to technological innovation; rather, it must include a confrontation with experimentation in the sciences (human, physical, and engineering), which, from their end, provide some fundamental analytical tools. For example, combining experimental methods of empirical data collection with computer modeling currently makes it possible to corroborate models that explain the cognitive functioning that underlies human behavior. These methods also offer the possibility of reproducing artificial behaviors capable of obtaining a reasonable correspondence with
the empirical data stemming from the observation of human behavior and, in the longer term, of reproducing its characteristics in artificial systems that are capable of perceiving, understanding, and anticipating human behavior, interacting and provoking novel reactions and experiences among humans.

The project is organized around three axes:

1. Research that seeks to define a corpus of historical and contemporary practices and theories concerning behavioral objects and, through this, to question the recurrence of problems and methodologies that are common to art, design, and science (cognitive, social, and engineering). Special attention will be given to certain movements, such as the cybernetics of the 1950s and ‘60s and kinetic and programed art (1960s).
A research seminar has been developed, bringing together the student-researchers from the program with other outside researchers. The goal of the seminar is to question the practices of the program, by putting them in perspective in an analytical and theoretical horizon. In the seminar, which gives priority to exchanging ideas, key figures from the worlds of research, art, and design participate regularly in order to share their experiences and reflections:
http://diip.ensadlab.fr/fr/article/seminaire-behaviors-2
In 2013, an initial international symposium was held at the Centre Pompidou:
http://www.centrepompidou.fr/cpv/resource/cir4Rq/rRRKd7g

2. The creation of experimentation sessions (in research-creation) in the form of workshops and practical tests, in which certain objects and approaches are developed, experimented, and tested. Within this framework, the practical experiments will be analyzed and discussed at open as well as closed sessions composed of multidisciplinary teams of social-science researchers, philosophers, robotics specialists, psychologists, artists, designers, etc. The first experiments during the workshops at EnsadLab, initiated in October 2013, have made it possible to design a modular robotics toolkit that includes a software element and a hardware element.
Cf.: http://diip.ensadlab.fr/fr/projets/article/the-misb-kit
This toolkit was tested and approved during an international workshop entitled “The Misbehavior of Animated Objects,” organized with MIT Medialab’s Tangible Media team, during the TEI conference (8th International Conference on Tangible, Embedded and Embodied Interaction).
Cf. : http://diip.ensadlab.fr/fr/workshops-232/article/the-misbehavior-of-animated
A second workshop was organized in 2014, with Simon Penny:
Cf. : http://diip.ensadlab.fr/en/workshops-231/article/misb-workshop-with-simon-penny

3. The creation of a scientific experimentation protocol, which develops a forward-looking approach at the crossroads of cognitive psychology, behavioral robots, design, and art. In 2013, the foundations were laid for software that can simulate a behavior that, to the eyes of a human observer, seems self-motivated by the moving entity. The trajectory algorithm is developed based on cognitive and conative properties simulated in the current program (e.g., capacities for perceptive discrimination, appetence with regards to certain properties of the environment, etc.).
The foremost objective of this software is to provide the project team with the appropriate algorithms for designing behavioral objects capable of implementing certain adapted actions while giving the impression that they are “intentional” actions. The second objective of this software is to enable the development of experimental research. By controlling certain parameters of the movements of the simulated objects, we will be able to evaluate the inferences produced by the observers in reaction to certain behaviors.

This project is developped with the support of the Labex Arts-H2H,
in the framework of a partnership between:
The Université Paris 8
The École nationale supérieure des Arts Décoratifs
and The Centre Georges Pompidou, Paris

The project The Behavior of Things is coordinated by Emanuele Quinz on behalf of Labex Arts-H2H. In this context, several projects has been realized:

The MisB KIT by the Reflective Interaction team under the direction of Samuel Bianchini.

International colloquy The Behaviour of Things on june 8th 2013 at Centre Pompidou, organized by Emanuele Quinz, Samuel Bianchini and Valérie Guillaume with Philippe-Alain Michaud and the support of Labex Arts-H2H. 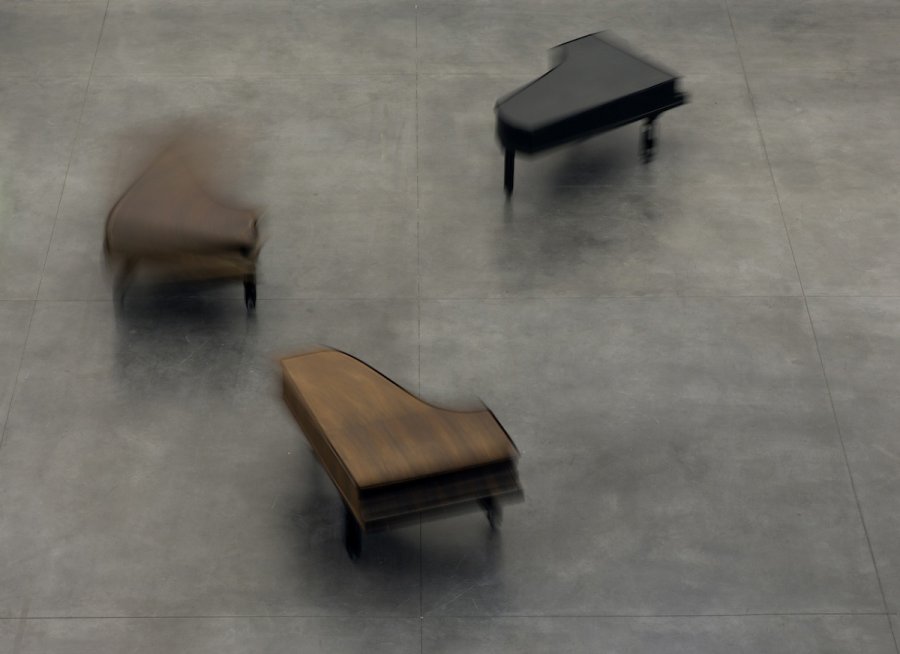